The paintings are about myself, painting, and landscape.
20/09/18 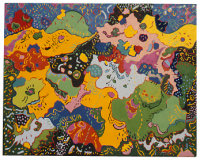 They are about myself because they are expressive of moods and feelings. They are about painting because art is always partly about art. They are about landscape because they are derived from drawings, observation and knowledge of landscape.
Some drawings are made of great vistas and views, others of detail on rocks such as lichen or the way water swirls seaweed about. Other drawings are of the patterns of modern cultivation, the graffiti of agri-business, and there are drawings of historic landscapes where the record of earlier human activity is locked into the surface forms.
I also make drawings in the studio. For both types of drawings I use a chinese brush and black drawing ink. The drawings made outside are concerned with recording my obervation of a particular place or portion of a place. The drawings made in the studio come from memory and expression. This same dichotomy runs through the paintings. Some are based on particular drawings made outside, others start as a drawing on canvas based on the spirit of a place.
Knowledge of the landscape plays as great a
part as observation. For example in the area of Leicestershire where I live the remains of open field systems can be seen as ridge and furrow. Many of the paintings start from the idea of a field (Maes in Welsh). The painting becomes itself a great field which is overlain by other schemata. The great field becomes a whole landscape. Over the years symbols developed in the paintings. Some symbols relate to human activity involved in farming both past and present. Stooks, great round bales, polythene silage sacks, patterns made by machinery on soil and in crops. Other symbols relate to maps, and colour coding, and others to the way in which archaeologists record detail of vertical and horizontal surfaces at various levels on a dig. Aerial photographs also fascinate me, often a particular reality is only revealed from the air. Any painting could contain all of these elements.
All this and more is in my head, it excites me, and so I make invention with it. Not every mark or shape in one of my paintings can be interpreted as depicting something. Some do, some don’t, and some are ambiguous. The paintings start as a drawing done with a chinese brush, executed swiftly. They are then built up in layers of information and expression. Working in acrylic paint is an accumulative process. Every mark stays in the paint film. I work with bright colour, and a multiplicity of simple forms some of which are brush strokes. Without an appreciation of what they are about the paintings may at first sight look purely decorative, but they are fundamentally about landscape, not remembered in tranquility, but forged through a kind of manic joy, post-industrial icons for the land.