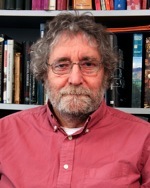 Since I graduated in 1967 with a degree in philosophy I have had a career in exhibitions, print and video as a free-lance designer and producer. I returned to study philosophy part-time in 1999 and the paintings changed from being about structures to being structures in their own right. In 2011 I returned to painting on paper and canvas.

MA, Middlesex University. 2002. Aesthetics and Art Theory in the Centre for Research in Modern European Philosophy. Dissertation: Understanding Jackson Pollock, an historical study of the series of interpretations involved in the reception of Jackson Pollock’s art and life.

2002 Award of bursary from the School of Arts, Middlesex University, for part-time study for an MPhil/PhD within the Centre for Research in Modern European Philosophy.

‘The Memory and Expectation of Aesthetics: A Study of Adorno’s Aesthetic Theory’

Teaching experience
Part-time demonstrator/tutor in the department of Philosophy at UCNW Bangor, 1967-69, responsible for tutorial groups in Epistemology and Ethics.

The Arts 1970s/80s
Research reports and feasibility studies for The Wesh Arts Council, The Crafts Council, Regional Arts Associations and local authorities. Exhibition catalogues for touring exhibitions. Visual Art journalism for art and craft publications. Writer for Artscribe, and other fine art publications such as Pantheon in the late 1970s.

In the spring of 2010 Philosophy at Middlesex was under threat of closure.
Middlesex University is sleep walking into a global public relations disaster by the announcement of the imminent closure of Philosophy. The world-wide condemnation of this boneheaded decision, which is surely gathering force, can only be avoided by a volte-face which, judging by the low level of decision making exhibited thus far, seems unlikely. The blind pursuit of the bean counters holy grail of 2% is regrettably entirely understandable in an institution that clearly has no morality, holds nothing dear and is merely beholden to a crass accountancy that is blindly indifferent to wider values. By proposing to close the Centre for Research in Modern European Philosophy, Middlesex University has transformed itself, as if by magic, into a world centre for excellence in the worship of the bottom line. This short termism leaves Middlesex University standing proud as a beacon of incompetence, indifference, and the second rate. Henceforth Middlesex will have an international reputation as an educational institution unfit to call itself a university.
Alan McPherson
29/04/2010
The Centre for Research into Modern European Philosophy moved to Kingston University in the autumn of 2010.
http://fass.kingston.ac.uk/research/crmep/