The Midland Enclosures series of paintings are landscapes as seen, remembered and understood in various ways. Gillian Darley's unpublished essay was written to accompany the touring exhibition of my work organised by The Lady Lodge Arts Centre.
20/09/18 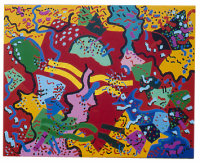 Midland Enclosures - Statement
My paintings are in acrylic paint on canvas or paper. I use the landscape format, so the width is greater than the height. The paintings start from one overall colour, often a bright yellow, a pale green, or dark blue. This coloured surface is a field into and onto which I draw with a brush. Little of this first colour will be seen in the finished painting.
Acrylic and oil paints are quite different. Acrylic paints are water based emulsions and dry fast. Oil paints dry over many days. This speed of drying means that working in acrylic paint is an additive process. All the brush strokes made in the paint film are kept. So, I have to paint in a precise manner, and think out how the various layers of colour will work. I use acrylic co-polymer emulsion which is completely water proof and permanent, neither does it crack, shrink or yellow with age. It has great versatility as it can be used in a thin wash as a water colour, or put on in thick impasto. I work with manufactured paints, mainly Liquitex, and also with paints I mix myself. I make paint by adding a little water to a pure pigment and then mix in the acrylic emulsion. By adding a colloid I can adjust the thickness of the paint.
I lay out the structure of a painting by drawing, roughing in areas of colour, and then placing shapes and schemata. I work quickly to begin with and will often start a number of paintings in one long concentrated session. This family of paintings all share common concerns and features. They are worked on in succeeding weeks until the group is finished.
The paintings are about myself, painting, and Out There. They are about myself because they are expressive of moods and feelings. They are about painting because art is always partly about art. They are about Out There because I live in a lowland Midland landscape. This is an observed, known and remembered landscape of a few very particular places. I go to a place and make drawings with a brush. Later in the studio some of these drawings are made into paintings. I also take photographs as reminders. I have made a small collection of examples of all sorts of different ways our society has for recording landscape. Estate plans, aerial photographs, paining styles, parks and garden views and maps, modern and ancient. I also look at particular favourites such as keys for symbols on maps, and the Land Ultilisation Survey.
If I go up onto Burrough Hill, an Iron Age fort, I can look out and see the past visibly locked in surface forms in the landscape of Leicestershire. Medieval ridge and furrow strips from the old open fields, deserted villages, enclosure fields and their farmsteads, thorn hedges, fox coverts, parkland, paths and trackways. I also see farming, animals and machines and crops such as winter wheat, and the bright yellow fields of oil-seed rape. All the patterns of modern cultivation, the graffiti of agri-business.
All this, and more, is in my head, it excites me, and so I make invention with it. Not every mark or shape in one of my paintings can be interpreted as depicting something. Some do, some don’t, and some are ambiguous. The paintings exist in their own right. They are invented colour and line.