Over 200 hundred paintings comprised of lines and dots on a coloured ground evoking the complexity of an unsystematic system.
20/09/18 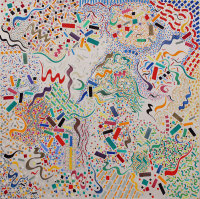 Making a painting is a process that starts with the ground. No two grounds are ever exactly the same. The ground is a painted surface on canvas, card or paper. Bought in, pre-stretched and primed canvases have a uniform surface akin to paper or card. Laying two coats of the ground colour on factory primed canvas, card or paper has different effects depending on the type of card or paper involved. On a canvas I stretch myself, two coats of white primer are first laid down in horizontal brush strokes followed by two coats of ground also laid down in horizontal brush strokes.
This monochrome ground appears to be even, but in fact it has a quiet quality of considerable variety over the surface. It is not merely a surface for it has depth. The first marks laid down on or in this ground, line or dots, are not only positioned in relation to the overall shape of the ground but to the detail of the ground itself as well as to each other. The paint I am currently using to make the ground is an iridescent pearl. It is slightly reflective and alters as the viewer changes position depending on the direction of the ambient light. Laying down this ground is not a preliminary to starting a painting, it is the start of a painting.
Once the ground is laid down the painting is in effect a monochrome. There is a cloud like quality to the ground, it is not inert but active. The lines and dots that are then added to the ground, in most of the field, leave the ground to be itself. And yet without them, without the obscuring lines and dots of many colours, the ground could not come into its own, could not come into its full being as ground. The ground requires the overlaid lines and dots to become fully articulated, just as the lines and dots need the ground. This is the complexity of an unsystematic system. The painting is a field of forces involving binaries such as attraction and repulsion, coming forward and receding, as well as repetition and mirroring. The ground supports and contains the lines and dots. Lines and dots are both in and on the ground. This is a tri-partite system. Although there is more visible ground than there are lines and dots, it is the lines and dots the viewer looks at. The ground is the dark matter of the universe of the painting.
Lines and dots are a binary code, but unlike most codes which have only one interpretation, one meaning, this binary code of lines and dots is ambiguous and is therefore open to interpretation in multiple ways. In this respect it appears to be the obverse of mathematisation and yet it shares the same ambiguous qualities as advanced mathematics. My classification of all the marks on the canvas, as either a line or a dot, appears at first sight to be clear-cut and yet there are marks that could be classified as either or both. In this the classification mirrors the binary biological classification of living organisms into either animals or plants. In three dimensions a line seen end on is a dot. These paintings are complex systems that are purely about the inter-relationships between ground, lines and dots.